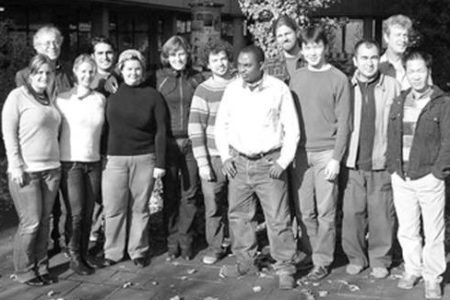 Architecture
Iren was born in Havana in 1978 and graduated as an architect from TU-Havana (ISPJAE) in 2001. Between 2002 and 2006, she practiced at the Project Department of the Historian Office of Havana and as an independent interior designer-architect. Through her work and postgraduate courses, she was upgraded as a specialist in the rehabilitation of historical buildings and sites. In 2007 she joined the MU master programme. It allowed her to be trainee at the European Council in Strasbourg, then at the German Cooperation (GIZ) in Ethiopia. These experiences eventually helped her to write her thesis. She also worked as a freelance architect at JAG Arquitectos in Spain and FS-Architekten and BeyeScheid, both in Germany. She currently lives in Singapore and still work as a freelancer.

Geography, Urban Planning and Anthropology
After completing his studies at the University of Bonn, Andreas graduated in 2007 with a thesis on socio-economic changes and settlement development in the Indo-Himalayan Gori-Valley. His interest for architecture, design and the ‘urban’ as well as the wish to further understand ‘development’ led him to Mundus Urbano. His master’s thesis dealt with urban planning strategies in Valencia, Spain. In 2009 Andreas enrolled in the architecture and design-oriented postgraduate master ’21st Century Projects’ with Carlos Ferrater at the UPC in Barcelona. During his studies, Andreas worked in architecture offices, a GIS technology consultancy, and research and development. Today he works as an assistant professor and researcher at TU-Berlin’s Institute for Urban and Regional Planning (ISR). He is writing his doctoral thesis on “Impacts of New Digital Technologies on Urban Systems,” within the ARUS programme at the University Duisburg-Essen.

Tourism Management
Born in 1984, Lauren grew up in Johannesburg South Africa and graduated from Wits University with a BA Honours in Tourism in 2005 and went on to complete a Postgraduate Diploma in Business Administration at Wits Business School in 2006. She developed a keen interest in mega-events, urban development, and tourism during her Honours year when she undertook a research paper entitled “2010: The Johannesburg Experience”. She chose to continue her studies in urban development with the intention of completing a PhD in due course and will hopefully further a fruitful career in the field of urban development and regeneration.

Architecture
Sandra obtained her degree in Architecture at the Universidad Simón Bolívar in Caracas, Venezuela. During her last years of studies, she participated at a student exchange program with the University of Karlsruhe in Germany. During that time, she did an internship in PEG MbH, a planning office which specialized in social and healthcare buildings. After completing her studies, she worked for over a year at the Architecture Office ma+, Franco Micucci y Arquitectos Asociados, located in Caracas. She contributed in different architectural projects at several stages during her time there. The experience she gained working in Venezuela influenced her decision to continue her career with the goal of acquiring international knowledge and further skills in urban development.

International Relations and Political Science
Emanuel Trujano graduated with a degree in International Relations. He began his professional career, working for the Central Bank of Mexico. While over there, he had the chance to learn a lot about international institutions, such as the International Monetary Fund. For ten years, he worked as a manager, specialising himself in the Pension System. His thesis work about focused on an agricultural project, financed with pension funds. In 1999, he did his social service with the Foreign Relations Secretary of Mexico where he lent his services to the Department for Africa and Middle East. He also worked as an analyst in international affairs for a magazine, and has conducted research in the bilateral relations between Mexico and Germany during the XIX century. After this Master, he would like to return to Mexico and work for the Foreign Relations Secretary or present to his government, urban projects to improve the quality of life in urban areas of Mexico.

Political Science
Coscun finished with bachelor’s degree in the field of Political Science and Public Administration. He decided to specialise in city planning. Because of this, he applied for the master’s program since he liked to be a part of solution to urban development issues.

Environmental Studies
Obed is from Zambia. He has work experience in the field of environmental health especially wastewater and sanitation. Obed acquired this knowledge through GTZ Ecosan in Lusaka, Zambia, as well as with an NGO in his hometown. His work ranged from environmental health education to participatory design of urban sanitary infrastructure.

Architecture
The finished his architectural course in 2002 at Hanoi Engineering University. After that, he become deeply involved in large urban planning projects in Vietnam such as the North An Khanh new urban area planning, Cai Gia– Cat Ba villas and hotels area planning. His dream was to build “paradise” communities for Vietnamese citizens, especially for poor people. At the same time, he wanted to learn about current political, social, and construction circumstances in other countries, both developed and developing– his reason to participate in the inaugural MU course of 2007. He eventually returned Vietnam to work for Coteccons in some projects: Phu My Hung new urban area, Marble Moutain Beach Resort—continuing on his career trajectory of building “paradise” communities for his country.